Fairy Tale Fathers and Their Failings 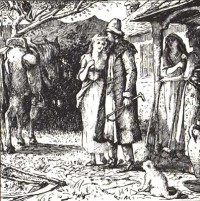 Through the years, fairy tales have provided commentary on marriage, family life, social mores, and more. Often deceptively simple, these stories illustrate patterns observed in life, few more distressing than that of the fractured family. A review of well-known stories reveals that the deficient father is a fairy-tale staple–often counterpart to the evil mother/stepmother, though usually not as severely condemned.

In general, fairy tale fathers fall into one of the following categories:

Only in the rare fairy tale, do fathers take a strong, caring role in the live of their children. In fact, I’m hard pressed to think of any such tales, aside from some versions of Beauty and the Beast–and even then, the father is often willing to sacrifice his daughter in his stead. These stories address an unfortunately common reality, and modern-day fantasy carries on in much the same vein.

I would like to see positive family dynamics portrayed more often, but it’s worth noting that while these tales often present the failing of fathers and the suffering of children, they conclude in a fashion far from bleak. The characters may come from troubled families, may have the worst of fathers (or mothers), may indeed suffer long…but their family circumstances don’t ultimately determine their fate. And that, I think, is a Biblical perspective. We’re not bound by our past or by our origins, but can overcome even the worst of situations by the grace of God.

Therefore, stories that depict failing fathers, cruel mothers, and fractured families have significance and can offer hope. Yet so can tales with strong, healthy families, albeit hope of a different nature. So I’m curious. As a reader, which is more meaningful to you? A character with a healthy family life or one who overcomes a difficult family background?

And if you’re a writer also, which do you find more often in your stories?

The Far Country (and giveaway results)