Christian Fantasy Fantastic in the Everyday 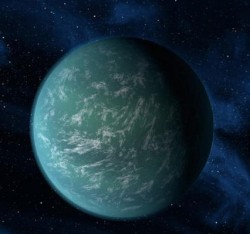 Echoes of speculative fiction often find their way into the realm of fact, as scientists discover more about the world in which we live and new technologies make possible what would have been wondrously improbable in earlier eras.

The discovery of Kepler 22b, a planet recently discovered by NASA by means of the Kepler Space Telescope, illustrates this further. It exists outside our solar system, yet bears vast similarity to Earth, occupying a potentially habitable zone. It orbits a sun-like star at an ideal distance and based on available data would likely share similar temperatures to Earth. Furthermore, some of the data suggests it may be a planet entirely covered in water, which brings me to the correlation with speculative fiction.

Over seventy years ago, CS Lewis wrote Perelandra, a continuation of the tale of Ransom’s exploration of space. In it, Ransom finds himself on Venus (Perelandra), an unfallen world inhabited only by a man and woman created for this realm and untainted (so far) by sin. Aside from a single mountain known as the Fixed Land, the planet was oceanic and the Adam and Eve of this Perelandra dwelled on floating rafts of vegetation that drifted through the vast seas.

When I read of Kepler 22b, a possibly habitable oceanic planet, Perelandra was the first thing to come to mind–a demonstration of the way imagination found its reflection in reality all these years later. Of course, much of the information offered by NASA on Kepler 22b falls into the realm of an educated guess, but it’s an interesting correlation nevertheless. Since Kepler 22b is over 600 light years away from earth, if we’re ever to explore it, we’ll have to discover a more efficient method of space travel. Perhaps the scientists should consult works of speculative fiction, because sometimes imagination echoes reality more closely than we know.

Have you ever been surprised to find that a fantastic book you read (or wrote) ended up unexpectedly resembling reality?