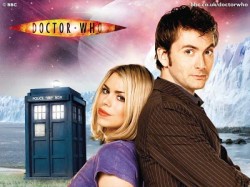 Over the last few months, I’ve begun to watch Dr. Who (after hearing so many speculative reader and writer friends heartily endorse it), and with interest I’ve observed various themes develop as the series has unfolded. In the first season, one of the things which stood out most to me was the clear demonstration of the human yearning for significance and meaning, for something more than the mundane tasks of everyday life.

In the final episode of that season, Rose Tyler, unwillingly sent home while the Doctor is facing his death, demands to know what she should do, how she can return to everyday life while matters impacting the universe are occurring around her. She can’t because she’s seen a better way of living life and the value of even one person who will make a stand for what’s right.

Her words bleed with the desire for something greater, the desire to make a difference, to have an impact on her world. Yet ultimately the show provides little satisfaction for this longing, even for the characters that inhabit it. The Doctor can’t take everyone exploring the far reaches of the universe. He can’t demonstrate to everyone the wider world out there, and the place they have within it. Only a select few, Rose among them, have their lives changed, and their horizons broadened by their adventures with him. Though those that interact with the Doctor are changed, he’s far from an omnipresent being. Of the alien race of Time Lords, yes, but still only able to personally impact a small number of lives.

So Dr. Who demonstrates the human yearning for significance and meaning in life, yet it doesn’t provide the means to satisfy it and doesn’t show the reason that longing exists in mankind. Indeed, the show leaves little room for a Creator. Yet it still accomplishes a purpose, for we must feel a desire in order to long for and seek its fulfillment. As does much of speculative fiction, Dr. Who not only unfolds an intriguing tale, it also has the potential to rouse people from the slumber of the ordinary and ignite that spark of desire in the human soul for another world–a desire which may find perfect fulfillment in God. For Scripture says, “he who seeks finds; and to him who knocks, the door will be opened.” First comes the desire, the hunger, the seeking…and then the fulfillment.