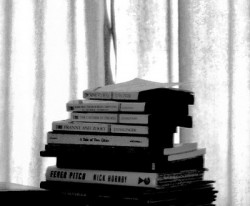 Recently, Becky Minor over at Call Of the Creator explored the viability of fantasy in the Christian market, and I’ve been considering her comments over the last few weeks. In so doing, I found they sparked some thoughts of my own that I’d like to discuss here.

She addressed two issues in the same post–small press sales and fantasy in the CBA market–both valuable to consider, but not necessarily tied to each other.

In the beginning, she suggested that most Christian fantasy novels will sell only several hundred copies. Yet this was based primarily on experiences with small press publishing. So I thought I’d do a little exploration of small press publishing in the general market. The several articles I found that included sales figures all indicated the same thing–in general, a small press book will sell an average of a few hundred copies in the first year.

By the way, none of this is a statement against small presses–I think they have much in their favor. But the potential downside is a smaller reach that can lead to fewer sales. From my perspective, given the disparity of sales between large publishers and small presses, it doesn’t work to connect fewer sales of Christian fantasy from small presses to the overall state of the genre.

So moving beyond the issue of small press publishing, what do the sales of Christian fantasy look like? I don’t have hard figures. Becky pointed out the exceptions that evidently sell quite well (Dekker appearing on multiple bestseller lists, for example).

But based on my understanding of the sales figures publishers expect before renewing a contract, my guess is that many Christian fantasy books do have sales figures in the thousands, not the hundreds–as a number of fantasy writers continue to publish books through larger CBA publishers.

Of course, I could be wrong, since I don’t have access to sales data, and I’d be interested to hear what any “insiders” have to say on this point.

So it seems to me we as authors have to decide–do we stay within the confines of CBA? If we do, then we can’t complain about small sales reach. If we want to go to ABA, are we ready to stand our ground on the message of our work? The road to selling a Christian manuscript would be harder. But if you manage it, your reach would become exponential.

I’m not certain that the sales reach of a book will become exponentially greater just by selling in the general market. It still depends on the size and influence of the publisher, just as in the Christian market. There’s more interest in fantasy in the general market, but that doesn’t automatically equate to larger sales for any particular book.

Having said all that, I do think there’s great value in both avenues of publishing. Benefits of moving to the general market might include the greater number of fantasy publishing slots, the ability to reach a different audience, the desire to include “edgier” content, and so forth. However, I think if a writer heads to the general market simply for higher sales he/she may  be disappointed.

In the end, I agree with Becky’s suggestion that we must objectively evaluate the Christian and the general markets when it comes to writing speculative fiction. Each has limitations and benefits, and every writer must decide which path to pursue (though some do both successfully).

Becky presented a final question: “So what do you think–is Christian Speculative fiction a market that will ever really boom?”

I believe that Christian fantasy will grow through a variety of means (which includes branching out into the general market), as I’ve discussed almost a year ago.

What do you see when you look to the future of the genre? I’d love to hear some discussion on these topics.