Does Hope Lead to Clichéd Fiction? 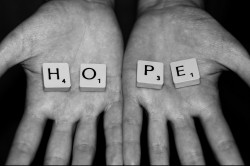 Most people desire a sense of hope, particularly in troubled times, and one place they get a glimpse of what hope means is through story. Edward Kitsis, one of the writers for Lost and producer for the upcoming ABC series Once Upon a Time shared that his new show would explore hope, since “everyone is kind of grasping for hope right now.”

His inspiration? The fairy tales of old, stories that are often “terrifyingly dark” but always have “undercurrents of hopefulness.” In this way, fairy tales mirror the realities of life, both the grim and the beautiful. Dark fears, rending sorrows, and legitimate horrors exist, and Christians certainly don’t go untouched. Yet hope can survive even the bleakest of situations, and people are searching for that assurance.

So when I see the value of hope in fiction being downplayed, as in Mike Duran’s recent post on Novel Rocket, I question it. He expressed concerns about the term inspirational fiction and about fiction serving as a means of communicating hope:

“This portrayal of Christian fiction as an agent of hope is common, and I think it captures the essence of what many readers expect from the genre. They want something uplifting, inspirational, encouraging, and/or ultimately optimistic. So is this why the genre exists, to evoke or inspire hope in those who despair? Is this why readers seek out Christian fiction, to recharge their Inspirational battery? If so, I think that’s a problem.”

He then expressed three specific criticisms regarding fiction that inspires hope: 1) literary predictability, 2) superficiality, and 3) an incomplete Gospel. While I admit that a “hope-infused” story could certainly be predictable, superficial, and incomplete in its depiction of truth, I ultimately think if we portray hope in a biblical sense it would give rise to none of these problems.

True hope doesn’t rely on everything working according to some predictable plan in which everything resolves perfectly at the conclusion. Rather, it grows in the most difficult of circumstances, stubborn as a tree burrowing into the cleft of a rock. True hope doesn’t need to ignore dark circumstances, but can shine all the more brightly in the midst of them. And true hope permeates Scripture and the human story–even the parts that seem the most bleak.

So what does hope look like on the pages of a novel? I think of Lord of the Rings, a trilogy most of us have read (potential spoilers ahead if you’re unfamiliar with the story). Upon each reading, I come away with a sense of hope, yet the conclusion strikes layers of emotion between joy and grief. There’s a sense of celebration with Sauron’s defeat and the subsequent freedom of Middle Earth from the oppression of his evil, yet we still feel the weight of things once beautiful passed away, the weight of suffering Frodo bears in body and soul, and the weight of the scars that have left their mark on Middle Earth. Perhaps some will call it predictable, yet it’s certainly not a simplistic evil-is-defeated-and-all-is-forever-perfect tale (though our ultimate destiny does involve the permanent defeat of evil and sin).

But can a book with less of a happy ending still inspire hope? A few months ago, I read Divergent by Veronica Roth, a dystopian fantasy novel that hit the NYT bestseller list shortly after its release. It’s a fairly brutal story (a little too brutal for my personal taste) in a bleak future, and everyone in the tale suffers much. Yet in the end, the protagonists and others make choices for love, choices to sacrifice for what they believe. Those decisions change circumstances and give a hint of hope for the future. Of course, as this is first in a series, it conclusion hints at greater trouble yet to come, but the point is that even in a genre known for its dark outlook, a story has the most power when it contains a hint of hope. It’s doesn’t make it trite or predictable, rather it rings true. Perhaps it’s no coincidence that though Roth writes for the mainstream market, she professes faith in Christ.

As a reader I most enjoy books that reflect true, biblical hope–not a sugar-coated happily-ever-after nor a tale of utter despair–and as a writer that’s the sort of hope I desire to reveal in the pages of my stories. What about you?