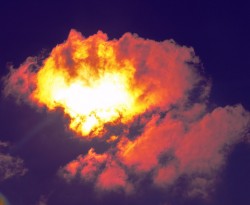 Through the years, speculative writers have created fantastic tales. At the hands of these storytellers, gleaming threads of imagination are woven together to craft visions that engage and inspire. And yet, the greatest speculations and imaginings of mankind, fashioned into stories that reflect truth and stir wonder, pale in comparison to the things crafted by our Maker.

Scripture describes strange and spectacular things beyond the ken of mankind, yet they are utterly true.

We follow the God who created the Leviathan to frolic in the deep, the one who sent Nebuchadnezzar to live with and act like the beasts of the field in order to deal with the arrogance of his heart, the one who suspended Ezekiel between heaven and earth by his hair to reveal mysteries to him. These things don’t fit with our accounting–they demonstrate just how much God is “other” than us, and how many mysteries of His nature He’s left for us to discover.

We’re honored that He has revealed Truth about His nature and His character in His Word, but at the same time, greater glories and wonders exist in Him than our minds have yet conceived. We have the privilege of being amazed through eternity at the wonders He created–of who He is–unfathomable things into which He permits us to look.

So when I hear the suggestion that writing speculative fiction from a Christian perspective confines the imagination, I must dismiss it. We’re created in the image of a God of endless wonders, and we only have to look at the Truth He has revealed to recognize just how wide a scope for the imagination He has given us.

The Christian Imagination expressed this well:

If the Bible is the Christian writer’s artistic model, then clearly the subject matter of literature is virtually unlimited. History, the supernatural, ordinary human life, the beautiful, the grotesque, redemption and damnation, the moral, the immoral, the earthly and the cosmic, the triumphant and the tragic–all suggest material infinitely pregnant with possibility to pursue the truths of God and the human condition.

Far from being limited, we have countless ways to explore truth and the freedom of opportunity to capture and reflect glimmers of light from above in the form of speculative fiction.