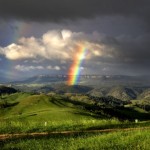 Sometimes I hear complaints, whether voiced in reviews or elsewhere, that books with happy endings present a false view of life, and that somehow books that conclude on a bleak or ambiguous note are more true to life.

Fantasy novels in particular, with their themes of good triumphing over evil, often come under accusation of cliched endings that fail to reflect the real world. But the truth is that in this life, things may seem to end on a bleak note–a loved one dies or a tragedy rocks a nation–but in the end, all will be made new. Even the most fantastic tale has the opportunity to show the bigger picture, the greater truths of life. Such stories offer us a chance to lift our eyes from the trials and difficulties of life to the ultimate reality we’re destined for, an eternity in which every tear will be wiped away, and “there will be no more death or mourning or crying or pain.”

For this reason, happy endings have endured, despite the criticism. In their best form, they don’t represent mere fancy or escapism, rather they cast light on truth. To borrow the words of GK Chesterton, “The popular preference for a story with ‘a happy ending’ is not, or at least was not, a mere sweet-stuff optimism; it is the remains of the old idea of the triumph of the dragon-slayer, the ultimate apotheosis of the man beloved of heaven.”

Though tragedies have their place as a literary form, I don’t like books that end without hope, those that are entirely grim and bleak. I don’t expect a story to end with everything packaged neatly and perfect resolution for the protagonists, but I want a hint of hope, of redemption, of change coming–a conclusion that provides unique satisfaction by foreshadowing the ultimate happy ending to come.

What about you? Is there a story ending–happy or otherwise–that you have found particularly meaningful?

A Day is Like a Thousand Years: Time Travel in Speculative Fiction