DaVinci and the Creative Mind 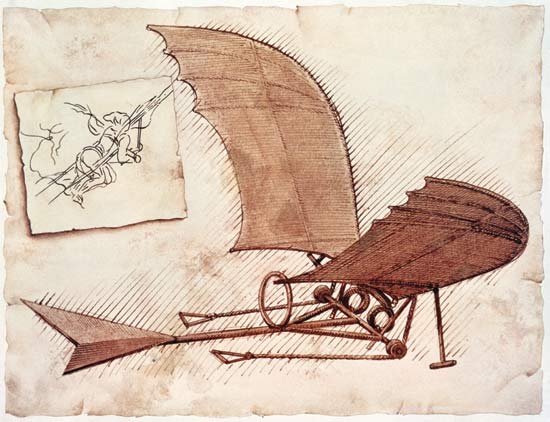 Recently, I’ve begun to familiarize myself a little with the life of Leonardo DaVinci, an inventor, artist, dreamer of dreams…and so much more. He accomplished an incredible amount in his lifetime, yet many of his ideas remained unrealized until long after his death.

Regardless, he remained bold in his imagination, and his speculations became part of our future. He envisioned a variety of flying machines. He sketched out ideas for cars and bicycles long before they appeared on roads. He drew prototypes of weapons of war–cannons powered by steam and large tanks–but he also explored the purely whimsical, like shoes that could walk on water, a lyre shaped in the head of a horse, and a robotic knight.

Unlike many, he didn’t settle for second-hand knowledge of topics that intrigued him–he did whatever it took to learn and pursue excellence. To understand anatomy, which he put to use in his art, he dissected a number of corpses and made countless pages of drawings and notes on the human body. And his art still impresses today.

He dreamed in a way distinct from everyone else in his time, right down to his mirror image writing that scrolled from right to left.

This carries over into the imaginative ventures we pursue. A creative mind learns and grows and explores new ideas without fear. Dreamers feel at home in the realm of the fantastic and don’t settle for things already seen and known, and DaVinci’s life provides an excellent illustration of this, though he was far from a perfect man.

Learning more about his creativity has brought consideration of the imaginative ventures in my own life–what impedes and what increases them. For me, chronic health issues (namely Lymes Disease and a number of problems it’s caused) often present an obstacle…but regardless I want to live boldly and dream freely. In the past, I’ve mentioned some practical ways that I increase creativity, but in the end, I’ve found that God provides the most inspiration and encouragement.

So does anything hinder freedom of imagination and creativity in your life? And what encourages you to dream? I’d love to hear your thoughts!

The Impact of a Name