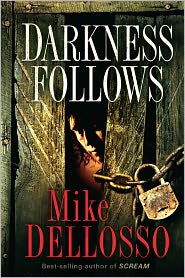 I’m keenly interested in the trends of the Christian speculative fiction market, and over the last few years, I’ve noticed a slow, steady growth in the genre of supernatural suspense/horror. The fact that three out of the last four CSFF tour selections have fallen into this category only served to heighten my sense of a change in the market.

So what is horror exactly? Mike Dellosso, author of Darkness Follows, defines it this way “horror has to have some supernatural aspect (varying degrees) that pits good against evil, light against darkness. It has to invoke some fear in the reader and more times than not carries that ‘creepy’ factor. Horror does not have to be suspenseful (though it often is), does not have to be fast-paced, and does not have to be thrilling. ‘Christian’ horror (again, for me) employs all these things and carries with it a certain redemptive storyline that shines the light of hope and love in the darkest of places (which is often the human heart).”

The description of Darkness Follows alone makes clear Mike’s intent to present both the reality of darkness and the love of a Father strong enough to overcome it, and he elaborates further: “I don’t write horror just to scare people (though admittedly that’s an added bonus), I write it to show people the contrast between light and darkness, good and evil. To show them that evil does exist but there is a Power more powerful than evil, a Light that can banish any darkness, and that in the midst of utter darkness there is still hope.”

Based on this definition of horror and how it relates to a Biblical worldview, it is easier to address the question of its presence and its growth. There will always be those opposed to the idea of any Christian speculative fiction, let alone horror. There will always be some (myself included) who can appreciate what Christian horror writers desire to accomplish in their novels and still have no desire to read stories that aim to induce fear. Nevertheless, there appears to be a growing audience that wants to read these stories, and a response to this demand. For those who are fans, the increase probably seems far too small, but I see a distinct change.

Ten years ago, I would have been hard pressed to come up with a title in this category, except perhaps some of Frank Perretti’s work. Now it doesn’t take much thought to come up with a list of names, and I don’t even read the genre. Over the last several years, Mike Dellosso, Mike Duran, Eric Wilson, Travis Thatcher, Melanie Wells, Ted Dekker, and a number of others have written in this genre. Their works are often termed supernatural suspense, which most writers seem to agree is only a euphemism for horror–one that doesn’t bring to mind stories of meaningless darkness and gore.

Since we’re on tour for Mike’s book, it seems fitting to share his perspective on the growth of this genre, as he expressed in an interview at Where the Map Ends:

“I think the whole group of speculative subgenres is gaining some traction, some more quickly than others.

I’d like to think ‘chillers’/supernatural suspense/thrillers is growing in popularity and I’m seeing some signs of that in comments my own readers make. Sci-Fi and Fantasy should garner more interest in the Christian market because they are ripe for carrying powerful messages.

I’d like to see those genres more widely accepted and marketed. There might be some old stereotypes that need to be broken before that can happen, though. I know with horror there’s always that stereotype that scary stories have to be chock-full of gore and guts and crude language. But that’s not true and there’s a few of us out there trying hard to break down those assumptions.”

It seems to me that their efforts are beginning to meet with some success. Like many of the other Christian speculative genres, horror may still be a small segment of the market, but there are signs to indicate its expansion.

If you’re a fan of Christian horror, it seems you have something to celebrate. And even if you don’t enjoy the genre, it reflects a greater openness in the Christian market to speculative fiction…and that’s good news for all of us speculative writers.

Do you agree? Disagree?

The Price of Victory