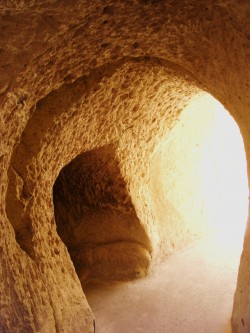 Since we’ve been discussing The Realms Thereunder, I thought it might be appropriate to highlight this post from the very early days of my blog on real-world underground cities:

“A man steps through the wall and enters a long-hidden city, concealed in stone beneath the crust of the earth. Surely such a tale belongs to the realm of fantasy. Yet it happened in our world, and more than once.

In the 1960s, a man in Derinkuyu, Turkey planned to expand his cave home, only to find, upon breaking through the wall a mysterious room, carved from rock. One hidden room would be fantastic enough, but this led to the discovery of an underground city, a network of corridors, chapels, stables, kitchens, wine and oil presses, bedchambers and storage rooms. Derinkuyu’s underground city has vast dimensions, capable of holding up to 50,000 people. Its eight levels (possibly eleven, but only eight explored thus far) may not compare to the Mines of Moria in intricacy of design of beauty, but vaulted ceilings stretching up to ten feet in the chapel, massive round doors of stone—weighing between 400 and 1000 pounds each—and long staircases all reflect skilled craftsmanship.

Incredibly, similar underground labyrinths sprawl under miles of territory in the Cappadocia region of Turkey…read more.”