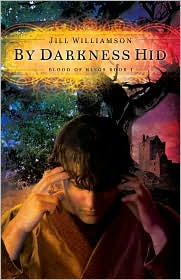 Since this is a blog for lovers of Christian fantasy, it seemed appropriate to support the genre (and the readers) by offering a semi-regular book giveaway. For this giveaway, the featured book is Jill Williamson’s By Darkness Hid, a Christy award-winning epic fantasy novel.

Here’s the description:
Half of Er’Rets is locked beneath an impenetrable shroud. On the side that still sees the sun, two young people struggle to understand the mind-communication abilities thrust upon them. It’s called bloodvoicing. Some say it’s a gift. One of the newly “gifted” wishes it had never come.

Achan has been a slave all his life. He is consigned to the kitchens of a lord and forced to swallow a foul potion every day. When an enigmatic knight offers to train Achan for the Kingsguard, he readily accepts. But his new skills with the sword do not prepare him for the battle raging between the voices in his head.

Vrell Sparrow is not who she seems. She masquerades as a boy to avoid capture by the powerful forces that seek to exploit her. But Vrell feels called to help a young squire who recently discovered his bloodvoicing gift, even if doing so requires her to work with those who could destroy her.

While Achan learns to use his new ability, Vrell struggles to shut hers down. All the voices strive to learn Achan and Vrell’s true identities—and a different kind of voice is calling them both.

If the book sounds like something you’d enjoy, I invite you to enter the contest. All you have to do is leave a comment on this post (and make sure the email address you put in the email field is valid, so I have a way to contact you if you win). I want this blog to be a service to readers and writers of Christian fantasy, so with that in mind, I’d like to know what sort of posts and discussion related to Christianity and/or fantasy interest you? Anything you would like or like not to see? Answer this question in your comment, and you will be officially entered.

The giveaway will remain open for two weeks (until 11:59PM EST, November 8th), and then I will randomly select a name and contact the winner by email. If I don’t get a response to the winning notification email within seven days, a new winner will be selected.

Disclaimers: Void where prohibited by law. Giveaway limited to the United States. Only one entry per person.

The Books of Heaven