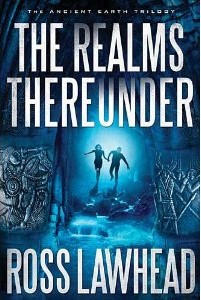 Starting Monday, the Christian Science Fiction and Fantasy blog tour will feature The Realms Thereunder by Ross Lawhead, and in preparation, I’m holding a giveaway for the book. Ross Lawhead (yes, the son of Christian fantasy author Stephen Lawhead) has penned a novel which fuses familiar lore and mythology with realms uniquely his own to create a tale of fantastic adventure.

During the tour, I’ll be talking a great deal more about the book, including an in-depth review, but I’ve included the basics here, so read on if you want to learn more.

Ancient legend tells of an army of knights that will remain sleeping until the last days.

The knights are waking up.

A homeless man is stalked by a pale, wraith-like creature with a mouthful of needle-sharp teeth. Maimed animals and a host of suicides cluster around a mountain in Scotland. And deep beneath the cobbled streets of Oxford, a malicious hoard besieges a hidden city.

Freya Reynolds is a university student with a touch of OCD and an obsession with myth and folklore. Daniel Tully is living rough on the streets of Oxford, waging a secret war against an enemy only he can identify. Years ago, they found themselves in a world few know is real. They have since gone their separate ways and tried to put that adventure behind them.

But the mythical world is now bleeding into our reality–a dark spiritual evil that is manifesting itself in forgotten corners of the British Isles. Alex Simpson is a Scottish police officer who specializes in hunting mythical creatures. Together, they must confront the past, the present, and points beyond to defeat the ultimate threat to humanity.

Nothing they’ve seen so far prepares them for what awaits . . . in The Realms Thereunder.

Sample of the first chapter:

Daniel Tully sat unmoving and unnoticed–just another gargoyle on Broad Street. A paper cup in front of him held fifty-six pence in small coins, and there were two pounds in his pocket. That meant either a proper meal or a bed in the night shelter. He really wanted both. He could try blagging his way into the homeless cafe–the Gatehouse–even though he was too young at only twenty years old. That would give him a meal and he could buy the bed and keep the fifty-six pence for tomorrow.

If The Realms Thereunder sounds like something you would enjoy reading, I invite you to enter the contest. All you have to do is leave a comment on this post (and make sure the email address you put in the email field is valid, so I have a way to contact you if you win).

The giveaway will remain open for two weeks (until 11:59PM EST,  March 2nd), and then I will randomly select a name and contact the winner by email. If I don’t get a response to the winning notification email within seven days, a new winner will be selected.

The Realms Thereunder, Day 1: A Review