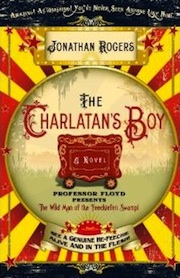 With the holidays upon us, I thought it about time for another book giveaway. So I’ll be giving away a copy of The Charlatan’s Boy by Jonathan Rogers (which is also the December Christian Science Fiction and Fantasy blog tour selection). To the best of my knowledge, Jonathan is the only one writing Christian fantasy steeped in the flavors of America, specifically the swamps and lowlands of the southern states. Others have compared his writing to a combination of Mark Twain and CS Lewis, and it makes for fun storytelling.

Here’s the book description:
As far back as he can remember, the orphan Grady has tramped from village to village in the company of a huckster named Floyd. With his adolescent accomplice, Floyd perpetrates a variety of hoaxes and flimflams on the good citizens of the Corenwald frontier, such as the Ugliest Boy in the World act.

It’s a hard way to make a living, made harder by the memory of fatter times when audiences thronged to see young Grady perform as “The Wild Man of the Feechiefen Swamp.” But what can they do? Nobody believes in feechies anymore.

When Floyd stages an elaborate plot to revive Corenwalders’ belief in the mythical swamp-dwellers known as the feechiefolk, he overshoots the mark. Floyd’s Great Feechie Scare becomes widespread panic. Eager audiences become angry mobs, and in the ensuing chaos, the Charlatan’s Boy discovers the truth that has evaded him all his life—and will change his path forever.

And here’s a sample of the first page:

I don’t remember one thing about the day I was born. It hasn’t been for lack of trying either. I’ve set for hours trying to go back as far as I could, but the earliest thing I remember is riding in the back of Floyd’s wagon and looking at myself in a looking glass.

I’ve run across folks claim they know everything about their birthday–where it happened, who they was with, what day it was. But if you really press them on it, turns out they don’t remember no more about it than I do. They only know what somebody told them.

I don’t care who you are–when it comes to knowing where you come from, you got to take somebody else’s word for it. That’s where things has always got ticklish for me. I only know one man who might be able to tell me where I come from, and that man is a liar and a fraud.

If you’re interested in the book, I invite you to enter the contest. All you have to do is leave a comment on this post (and make sure the email address you put in the email field is valid, so I have a way to contact you if you win). And something new this time around–if you tell a friend about this giveaway and they enter, you will get another entry, one for each person you refer. Of course, they will have to mention in the comment that you were the one to tell them about it!

The giveaway will remain open for two weeks (until 11:59PM EST, December 13th), and then I will randomly select a name and contact the winner by email. If I don’t get a response to the winning notification email within seven days, a new winner will be selected.

Fairy Tales and Interdiction: A Reflection of the Fall and Redemption