Book Giveaway: Dragons of the Valley by Donita K. Paul

Next week, the CSFF blog tour will fe 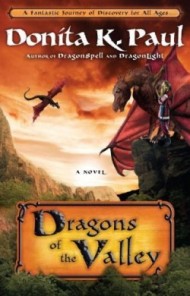 ature Dragons of the Valley by Donita K. Paul, and in preparation, I’m launching a giveaway for the book. Donita has made a name for herself writing YA fantasy with dragons. All her stories are fun tales of adventure set in a unique world where emerlindians, kimen, tumanhofers, and other races roam. I have plenty to share about the book during the tour, but here are a few tidbits to whet your appetite.

War threatens the peaceful land of Chiril… can one painter-turned-reluctant-swordsman really help?

With an invasion of her country imminent, Tipper Schope is drawn into a mission to keep three important statues from falling into the enemy’s clutches. Her friend, the artist Bealomondore, helps her execute the plan, and along the way he learns to brandish a sword rather than a paintbrush.

As odd disappearances and a rash of volatile behavior sweep Chiril, no one is safe. A terrible danger has made his vicious presence known: The Grawl, a hunter unlike any creature encountered before.

To restore their country, Tipper, Bealomondore, and their party must hide the statues in the Valley of the Dragons and find a way to defeat the invading army. When it falls to the artistic Bealomondore to wield his sword as powerfully and naturally as a paintbrush, will he answer Wulder’s call for a champion?

Small sample of the first page:

Bealomondore stood in the doorway of the darkened hall. Shadows hid the statue he’d been ordered to steal.

His heart told him to retreat. His feet wouldn’t move. But the kimen, whose wildest flying lock of hair only reached to the tumanhofer’s knee, insisted that the statue be stolen…

If you’d like to win the book, I invite you to enter the contest. If you’ve participated in one of my giveaways before, you know the way it works. All you have to do is leave a comment on this post (and make sure the email address you put in the email field is valid, so I have a way to contact you if you win). And if you tell a friend about this giveaway and they enter, you will get another entry, one for each person you refer. Of course, they will have to mention in the comment that you were the one to tell them about it!

The giveaway will remain open for two weeks (until 11:59PM EST,  Feburary 4th), and then I will randomly select a name and contact the winner by email. If I don’t get a response to the winning notification email within seven days, a new winner will be selected.

Long or Short Novels: Which Are Better?