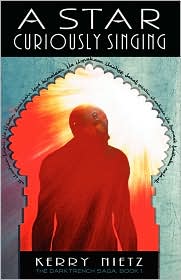 For this giveaway, I’m venturing beyond fantasy into science fiction territory with A Star Curiously Singing. In this novel, Kerry Nietz writes of a dystopian Earth in a unique, compelling fashion, capturing the foreign nature of the futuristic world in the distinctive voice of his protagonist, Sandfly. Read on to find out more…

If he fixes the robot, will he break his world?

Earth, hundreds of years in the future, when much of the world is living under sharia law. It is a dualistic society, where the average human plies the streets in squalor while the rich and powerful ride the strings—the cables—far above them. These latter Masters are so shrouded in technology that they need specialized debuggers—implanted and controlled techno-slaves—to manage their machines for them.

Sandfly is a debugger. A connected man. Via the stream he can hear the songs of millions of machines, down to the microscopic level. And fix them. That’s his job, his duty. It guarantees a place for him in Paradise. He has little choice in the matter, however. Aside from providing access to the stream’s vast storehouse of knowledge, his implant ensures Sandfly’s strict obedience.

For Sandfly, no job is different than any other, until he is assigned the mystery of a bot’s destruction.

The catch? The bot has been to space. Deep space.

But that is the least of his problems…

Brief excerpt from the first page:

I am dreaming, and yet I’m not. The night is cool, calm–the opposite of the big stew that has just happened. Like the Abdul’s god was throwing everything he had down on the city. All flash and action. On the horizon I can still see the bursts of lightning, the power in the moving tempest.

The driftbarges took it the worse, of course. Seventeen of ’em rendered inoperable, according to the messages on the stream. Unable to shift their precious cargo from sea to store…

If you’d like to win the book, just leave a comment on this post (and make sure the email address you put in the email field is valid, so I have a way to contact you if you win).

The giveaway will remain open for two weeks (until 11:59PM EST,  April 11th), and then I will randomly select a name and contact the winner by email. If I don’t get a response to the winning notification email within seven days, a new winner will be selected.

Mysteries from the Ocean Depths