Beauty and the Beast: Themes (Part Two of Four)

The many versions of Beauty and the Beast provide ample fodder for interpretation. Scholarly analyses of the tale abound and with them come many lenses through which the story is examined (feminist, Jungian, and so forth). I don’t intend to provide academic analysis here, so if you’re looking for something along those lines, you might want to pick up one of the many books on this topic, such as Beauty and the Beast: Visions and Revisions of an Old Tale or The Meanings of Beauty and the Beast, keeping in mind these are written from a decidedly secular viewpoint. Rather than an academic interpretation, I offer a reader’s perspectiv 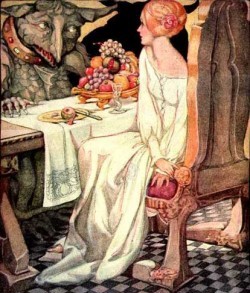 e, sharing a few of the themes that run through this story as they appear to me.

Perhaps most obvious and an excellent place to start is the juxtaposition of internal versus external beauty—Beauty versus the Beast. The tales highlight the contrast in their appearance, yet at the same time, emphasize the fact that internal comeliness matters most, and this point rapidly overtakes the initial focus given to the outward appearance. The value of inward beauty is progressively revealed through Beauty’s interactions with the Beast. At first, his appearance gives Beauty cause for much fear and discomfort, so much so that “she trembled at the sight of him” (Lang’s Beauty and the Beast). But she endeavors to treat him without prejudice and in time, when she is unharmed and sees the Beast’s kindness, friendship develops between them: “So they spoke together about the garden and about the house and about her father’s business and about all manner of things, so that Bella lost altogether her fear of the beast. So it went on for many days, Bella seeing and talking to the beast every day, till she got quite to like him…” (Jacobs’ Beauty and the Beast). As she relinquishes her natural fear of his appearance and engages him in conversation and relationship, his external ugliness begins to 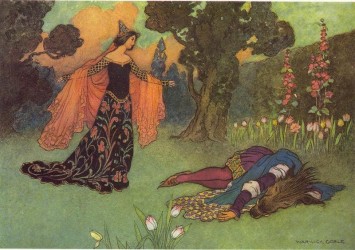 slip from her mind, and she develops an appreciation for his inner qualities, thus highlighting the preeminent worth of inward beauty.

Taking this a step further, Lang’s version brings out prominently one of the underlying themes through a message Beauty receives in her dreams: “do not trust too much to your eyes…do not let yourself be deceived by appearances.” So not only does the tale portray the importance of inward beauty, but also the deceptiveness of the outward appearances. Beauty cannot understand the warnings she receives, meant to hint at the Beast’s actual nature, but despite that, she comes to care for him, later saying, “I should be ungrateful if I did not care for such a kind Beast. I would die to save him from pain. I assure you it is not his fault that he is so ugly” (Lang’s Beauty and the Beast). Without conscious thought, she has looked beyond appearance into his character and found much to value. Just a short time later, she breaks the spell and realizes the prin 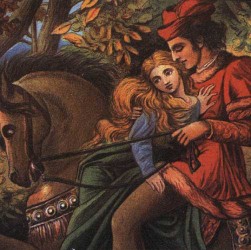 ce she encountered in her dreams was in fact the beast…and she has won the freedom of the one she loves.

This leads into another prominent theme—the redemptive, transformative power of love. From the beginning, Beauty’s acts are prompted by love. Her love for her father motivates her to go to the Beast in his stead, believing she is giving her life for his own. Her love for her family takes her from the Beast’s side, sometimes dangerously long because she cannot bear to cause them pain. And ultimately, her love for the Beast breaks his curse, an event possible only if a woman would love him, despite his ugly appearance. In turn, she receives love from the Beast and complete happiness: “they lived in splendid happiness forever after” (The Bear Prince). The consistent connection of love to transformation and redemption from the curse makes this tale a powerful one.

Different versions of the tale often carry different themes, and I’ve scarcely begun to touch on them here. What meaning do you take away from the Beauty and the Beast stories? What themes stand out to you? I’d love to hear others’ thoughts on this classic tale.