Beauty and the Beast: Origins and Variants (Part One of Four)

I’ve always had a fondness for fairy tales. They have richness beyond what is apparent if one only looks at the Disney or popular culture versions…and often portray spiritual truth, amid all their quirks and oddities. So for the next four Mondays, I’ll be taking a look at Beauty and the Beast—perhaps the most beloved of fairy tales and certainly a favorite of mine.

Most people have at least passing familiarity with Beauty and the Beast but may not realize it has countless adaptations and variations, so many that it received its own Aarne-Thompson subtype 425C (which falls into the broader category of “Supernatural or Enchanted Husbands”). Trying to pin down a single origin for a tale that has variants in almost every culture is a difficult task, but many scholars agree that the myth of Cupid and Psyche provided the root f 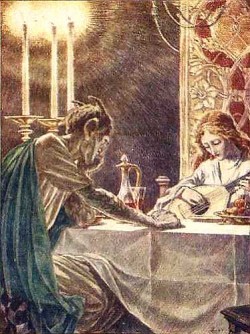 or the story of Beauty and the Beast, though I find that myth more similar to the tale East of the Sun, West of the Moon (which itself falls into greater category of “Supernatural or Enchanted Husbands” and has numerous forms of its own).

Regardless of the initial source, many cultures captured this tale in some form, but the story that supplied the versions of Beauty and the Beast we’re most familiar with was Madame Gabrielle de Villeneuve, a French woman who penned a novel length rendition of the tale in 1740. She intended her La Belle et La Bete for an adult audience, and it contained many subplots, lengthy dream sequences, and other additions. In 1756, Madame Le Prince de Beaumont adapted Villeneuve’s version into a novella, trimming out the extraneous material and focusing the story on the morality of Beauty…and of the Beast. From these two tales, new variants grew and flourished.

Though it plays out differently in the countless versions, the basic framework of the story usually remains the same. Beauty’s father breaks an unknown interdiction or in some other way manages to indebt himself to a beast, and in exchange promises his daughter to the Beast. Sometimes this is with the intent of giving her life in exchange for his own, other times with the intent of coming back and surrendering himself after he bids his family farewell, 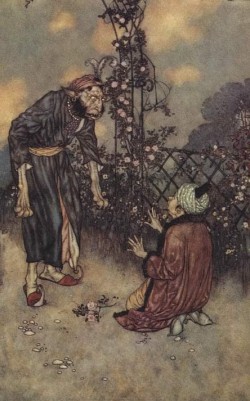 or the intent of sacrificing some other in her stead. Most times, Beauty insists upon surrendering herself to the Beast to save her father’s life, but regardless of her willingness or lack thereof, she ends up as the prisoner of the Beast. By her hand, the curse is broken and the Beast transforms back into his natural form, that of a human (often a prince).

As for the characters, elements of their nature may vary, but in traditional tales, their qualities of external beauty and beastliness remain the same. Sometimes the Beast acts heartless and fierce, at least at first, (The Little Nut Twig, Zelinda and the Monster, The Summer and Winter Garden), others he is kind and gentle, at least toward Beauty (Beaumont’s Beauty and the Beast, Jacob’s Beauty and the Beast). Some tales give him the form of a serpent (Basque Beauty and the Beast, The Fairy Serpent), others a great dog (The Small-Toothed Dog), a three-headed snake-like creature (The Enchanted Tsarevich), a lion-like hybrid animal (many versions), or any other monstrous form the human mind could conceive. In some tales, the Beast woos the Beauty the best he can by giving her everything her heart might desire (Beaumont’s Beauty and the Beast, Little Broomstick, The Scarlet Flower), in other tales he forces her to comply with his exact wishes (Little Nut Twig). Often he asks her to marry him, a request always denied until he is about to die, when Beauty voluntarily professes her love. 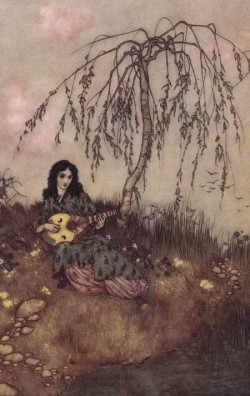 her (Villeneuve’s tale had her as the youngest of six boys and six girls!). In every old tale, she’s beautiful, but modern day adaptations often put a twist on this (as Robin McKinley did in her retelling, Beauty). Her requested object, which leads to the Beast’s fury and demand for recompense, might be a grape (The Bear Prince), a rose (Beaumont’s Beauty and the Beast), a lark (The Singing, Springing Lark), a flower (The Scarlet Flower)—or nothing it all (Beauty and the Horse). She almost always leaves the Beast at some point in the tale, with his permission and instruction to return, but sometimes she forgets about him, distracted by other things (The Summer and Winter Garden), other times it is the kindness and love she has toward her family (Lang’s Beauty and the Beast) or her family’s schemes (The Scarlet Flower) that prevents her from returning to him. But she’s usually good-hearted and eventually able to look past the beast’s ugly exterior and come to love him. By her doing, the curse is broken, whether through her agreeing to wed him (Lang’s Beauty and the Beast), declaring her love (The Scarlet Flower), or taking some other action (The Little Nut Twig, The Clinking, Clanking Lowesleaf) that ultimately results in his transformation.

While many of the story incidentals vary, quite a few of the core themes remain the same, and we’ll take a look at those in next week’s post. In the meantime, I hope you enjoy reading some of the tales included here!

Tags:
Beauty and the Beast / Cupid and Psyche

Of Goblins and Invisible Thread