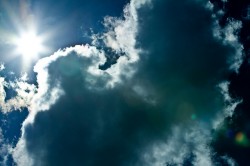 One of the enduring writers of the early 20th century, LM Montgomery is perhaps most well known for her stories about Anne of Green Gables, which have been adapted into films. Yet with her protagonist Emily (a lass with three novels of her own), she best captured the heart of a writer.

An imaginative child, Emily has a fondness for stories in all forms, but especially the ones she weaves herself. She’s appreciative of beauty in all forms, and that which she perceives in the world around her rouses her creativity. Her experience of “the flash” is one I think many writers will identify with:

“It had always seemed to Emily, ever since she could remember, that she was very, very near to a world of wonderful beauty. Between it and her hung only a thin curtain; she could never draw the curtain aside–but sometimes, just for a moment, a wind fluttered it and then it was as if she caught a glimpse of the enchanting realm beyond–only a glimpse–and heard a note of unearthly music.

This moment came rarely–went swiftly, leaving her breathless with the inexpressible delight of it. She could never recall it—never summon it—never pretend it; but the wonder of it stayed with her for days. It never came twice with the same thing. Tonight the dark boughs against that far-off sky had given it. It had come with a high, wild note of wind in the night, with a shadow wave over a ripe field, with a greybird lighting on her window-sill in a storm, with the singing of “holy, holy, holy” in church, with a glimpse of the kitchen fire when she had come home on a dark autumn night, with the spirit-like blue of ice-palms on a twilit pane, with a felicitous new word when she was writing down a “description” of something. And always when the flash came to her Emily felt that life as a wonderful, mysterious thing of persistent beauty.”

May we always perceive the wonder of the world beyond and seek to capture it in our writings.

What gives you a “flash” of inspiration?