Are Fairy Stories Only for the Young? 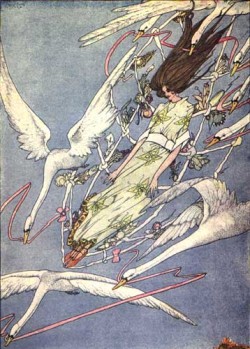 Sometimes I encounter the perception that fairy tales and fantasy belong to children and teens, and those of a more mature outlook want “realistic” fare. These adults say they want books that delve into real life issues, a perspective that ignores the concepts of life, death, and morality explored in fantasy literature. As writers of fantasy and scholars, Chesterton, Tolkien, and Lewis all wrote articulate rebuttals to the concept that fantasy belongs only to the young. I don’t intend to retake territory they’ve already covered, rather, I’d like to highlight the historical role of fantastic stories.

Through many centuries, fairy tales and fantasy stories were the province of adults, not children. Ancient civilizations passed down epics and sagas, stories permeated with the supernatural that still dealt with the realities of life. They spoke to the culture in which they were formed, but retained a timeless quality that allows many of them to have an audience today.

So also the fables of old, exploring concepts of morality in a fantastic framework and attributed to men such as Aesop, were primarily fare for adult dialogue. It wasn’t until the 17th century, when John Locke and others suggested that they were well-suited to entertain and inform children that a new focus emerged and illustrated versions targeted at children became more common.

Like the epic fantasy tales of ancient and medieval lore and the fables passed down over many centuries, many famous fairy tales took their first written forms as stories penned for adults in the 17th and 18th centuries. Though they borrowed from earlier oral variants, these stories took on many of their distinctive elements during this era and explored the social realities of their day. Villenueve’s Beauty and The Beast is an excellent example of this, but many of the early written tales and collections of tales across cultures aimed to reach adults.

Thus the earliest fantastic tales explored varying perspectives of life and eternity, morals and virtue, but not in a manner aimed at children. Rather they primarily reached an adult audience, and today they can accomplish both. Perhaps Lewis expressed it best when he said, “The Fantastic or Mythical is a Mode available at all ages for some readers; for others, at none. At all ages, if it is well used by the author and meets the right reader, it has the same power: to generalise while remaining concrete, to present in palpable form not concepts or even experiences but whole classes of experience and to throw off irrelevancies. But at is best it an do more; it can give us experiences we have never had and thus, instead of ‘commenting on life,’ can add to it.”

The Fusion of Speculative Art and Literature