Fantastic in the Everyday Writing 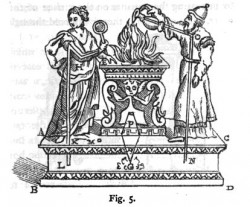 Perhaps it’s no surprise that as a reader and writer of fantasy, I’m interested in unusual inventions and ancient technologies, devices from our world that may provide inspiration for unique fantasy realms. And the inventions of Hero (sometimes known as Heron) of Alexandria fall into that category.

Not only did Hero create the precursor to the steam engine, he also invented some of the earliest automatons and robotic devices.

The primary purpose of his automatons appeared to be entertainment, and he captured the imagination with mechanical toys and devices capable of both sound and movement. Even more impressive was his theater which showcased an automaton play complete with sound, moving figures, and scenery. He used a system of strings and weights to set this play into motion and keep it in action for ten minutes.

The book Devices of Wonder discusses the various self-propelling figures Hero designed, including “an influential hydraulic-driven bestiary.” This bestiary consisted of birds and other animals made to move, chirp, drink, and so forth. While these and other automated toys had no practical function, he did create many devices to perform basic tasks–such as an automated door opener for the temples of the day and a simple vending machine.

Historians have detailed knowledge of his remarkable creations in part because he wrote books on various technologies, including the construction of automatons. These manuscripts described in depth the process of constructing all sorts of devices and making them function using a variety of energy sources, including steam and mechanical.

Through the creativity of a man who lived in the first century AD, we get a glimpse at some of the ways automated processes work in a world devoid of what we consider advanced technology. And for writers of fantasy, that’s something worth considering.

What do you think?