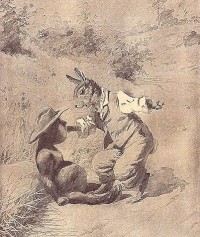 If I trace my lineage back, it goes to Wales, Ireland, Scotland, England, Germany, and an assortment of other European countries. No small wonder then, that I identify with the folklore from those regions, which provides the roots for much of today’s fantasy. In a sense, these legends are my legends, and fantasy tales written by British authors or borrowing from Western European lore will always remain among my favorites.

Yet stories steeped in American culture connect to my heritage in a different, more immediate way. I remember my great-grandmother, now in her nineties, telling me stories of growing up in the Great Dismal Swamp, tales I found echoed in The Charlatan’s Boy and the Wilderking series by Jonathan Rogers. In his books, I first glimpsed what American-flavored fantasy novels might look like, and from there I began to explore a bit more the unique folklore of the US.

America certainly has its share of unusual legends–think of Paul Bunyan and Brer Rabbit and all manner of tall tales and native lore. And we have some strange mythic creatures, as I explored in this post on the squonk, the tote-road shagamaw, and other odd beasts birthed in the lumber camps and forests of America. Inspired by the legend of the squonk, fellow fantasy writer Jeff Chapman even penned a short story giving his version of its origin.

And many other fantasy writers are choosing to draw from American history and folklore in their novels.  Though he draws from a wide variety of mythologies, ND Wilson places many of his stories in the modern day mid-West, and the setting presents a nice contrast to the fantastical nature of his books. Similarly Patricia Wrede has a series (which I have not read, so don’t know if they are worth recommending) set in the Wild West…only on this frontier, dragons and mammoths roam. This choice to incorporate elements from American history and folklore adds a unique flair in world awash with European style fantasy.

I don’t think fantasy will ever stop taking inspiration from European lore and settings–at least I hope not–but it’s nice to occasionally see something different.

Are there any fantasy novels incorporating American elements that you would recommend? Or any favorite pieces of American folklore that you’d like to share?